The CEC and the Training Center continue active cooperation with the Ministry of Education and Science of Georgia. This time, the information-educational program focused on the development of electoral culture in youth was implemented in public schools located in the regions densely populated by ethnic minorities - Samtskhe-Javakheti and Kvemo Kartli.

In order to develop an inclusive electoral environment and in this regard to promote the electoral awareness of young people belonging to ethnic minorities, as well as to make them active citizens, informational meetings with VII-XII grade students were held within the framework of the program, from June 1-10, 2022 in 22 public schools located in eight municipalities (Akhalkalaki, Akhaltsikhe, Ninotsminda, Bolnisi, Gardabani, Dmanisi, Marneuli, Tsalka).

The importance of the role of voters in the elections and the guarantees for the realization of the right to vote (including secrecy of the ballot and security of the voting process), conditions facilitating the involvement of ethnic minorities in the inclusive election process and services provided by the Election Administration - these are the important issues that the CEC Training Center staff discussed with public school students. Representatives of district election commissions for the purpose of promoting elections among young people, in the framework of the informational campaign “Talk to Voters”, introduced the participants of the meeting to the tools for increasing the credibility of the elections and shared Georgia's experience in the use of technology in the election process.

In order to facilitate the realization of the received information in practice, a simulated voting process was organized in public schools, in the framework of which the students performed the roles of both the voter and the members of the Precinct Election Commission.

The project is part of the program to promote the involvement of ethnic minorities in the election process. At the first stage, in cooperation with the Ministry of Education and Science of Georgia, the CEC Training Center trained 51 civic education teachers from public schools located in regions densely populated by ethnic minorities. The direct beneficiaries of the program held on June 1-10 of the current year were 560 students (women – 327; men - 233) from 22 public schools. 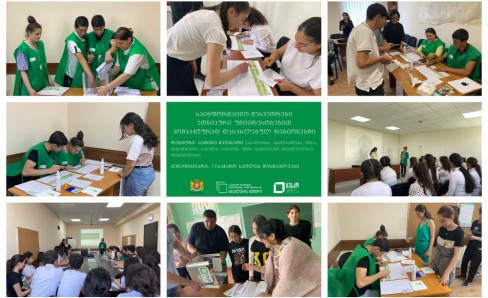