On the occasion of Global Elections Day, the Election Administration hosted the members of the Parliament of the Students of Georgia. Giorgi Sharabidze, CEC Deputy Chairperson met the students of four high education institutions and talked about the importance of elections.

“Today is the Global Elections Day. It is well known, that the only way to form a government in all democratic countries is to hold elections. Despite many complications, Georgia, with its experience, past, present and future, is on the path of development from 1919 to the present. We have variety of means of communication and a clear vision to constantly improve our performance for the advantage of stakeholders, and above all, for the benefit of the voters” – declared Giorgi Sharabidze during the meeting with youth.

As part of the event, Natia Ioseliani, the representative of the Training Center held a seminar for youth. A mocking voting process was also organized for the visitors: The youth practiced all the stages that the voter goes through at the polling station on Election Day.

Young people got acquainted with the photo exhibition reflecting the electoral history. At the end of the meeting, they also visited the CEC library and got introduced with electoral documents and a number of awards CEC has received at different times.

Global Elections Day is celebrated on the first Thursday of February since 2005. The Association of European Election Officials (ACEEEO) initiated it at the global conference held in September 2005 where conference participants, including, election experts and election officials have proposed an initiative to set an annual date dedicated to the elections. 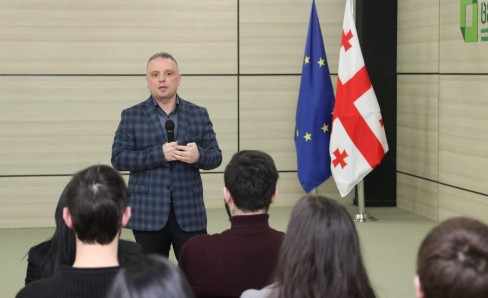